What areas do you want to be addressed at the Digital Legacy Conference, NY 2018?

Get in touch and let us know your thoughts! https://digitallegacyassociation.org/contact

Your digital legacy: an emerging aspect of advance care planning

As part of Commentary’s special feature on end-of-life care, James Norris, founder of the Digital Legacy Association, examines how a patient’s digital footprint is an increasingly common part of advance care planning.

The internet has been the biggest catalyst for change since the industrial revolution. It has changed the ways in which we consume and share information and, in doing so, the ways in which we interact with one another has changed forever. Recent Ofcom statistics reveal that adults in the UK now spend on average 22.9 hours a week online, with those aged 16–24 spending 35.2 hours a week online.

While online, many share personal thoughts, photos and videos on social media sites such as Facebook, Twitter, Instagram, etc. Prior to the internet, photos and videos existed only as physical assets (eg as photo albums, photo frames, video cassettes etc). Now, social media and connected devices (like mobile phones) allow these assets to be uploaded and shared online (often referred to as ‘in the cloud’). This allows conversations to break free of previous constraints and take place in real time. This enables friends and family members who may live many miles away to stay connected with their loved ones on a regular basis.

The Digital Legacy Association was launched three years ago at Hospice UK’s conference in Liverpool. It was apparent that people were not making suitable plans for their digital estate and that increased awareness, support literature, lobbying and training was required at a national level.

What is a digital legacy?

Our Digital Death Survey indicates that the importance we place on our being able to view social media accounts following someone’s death is increasing year on year. For example, when respondents were asked: ‘If someone you care about were to die, how important would it be for you to be able to view their social media profiles?’ 45.2% of respondents replied ‘important’ or ‘very important’ in 2017, up from 37.3% in 2014.

What are digital assets?

The term ‘digital assets’ can refer to items such as music purchased through Apple, eBooks purchased through Amazon or photos and videos captured on mobile phone. It is increasingly important that the general public make plans for what should happen to their digital assets and their digital footprint in the event of death. Making suitable plans can help ensure sentimental photos, videos and documents are still accessible and not lost upon death. Pre-planning can also ensure that assets that are of monetary value, such as business files and purchased media, are still accessible.

Conversations about assets and legacy

It is important that healthcare and social care professionals speak with patients about their digital lives when having advance care planning conversations. For some people, simply telling a loved one the password for their mobile device before losing the ability to do so may be a suitable plan. However, more regular users of technology (who may use social media, gaming or have money stored and spent in PayPal, eBooks, music libraries etc) may prefer to document their wishes in a social media will.

Our research indicates that the sentimental value placed on people’s digital legacy will continue to increase each year. While working for the Digital Legacy Association, I have often received the feedback that these issues are ‘very important for the younger generation’. Although we fully agree with this statement, one in four people over the age of 65 in the UK say that they are active on social media (Office for National Statistics 2016), and so we argue that digital asset and digital legacy planning is an important area for everyone regardless of age, religion, gender or creed.

James Norris is the founder of the Digital Legacy Association, a professional body dedicated to raising the quality of end-of-life care in all areas relating to the proection of digital assets and digital legacy.

We are delighted to announce that this year’s Digital Legacy Conference will take place in the USA. More details to come. Joan Bakewell discusses all things digital legacy for her ‘We Need To Talk About Death’ series. The episode can be listened to here

The call for speakers and papers for the Digital Legacy Conference 2018 will begin in January 2018. The next conference is due to take place in June 2018. 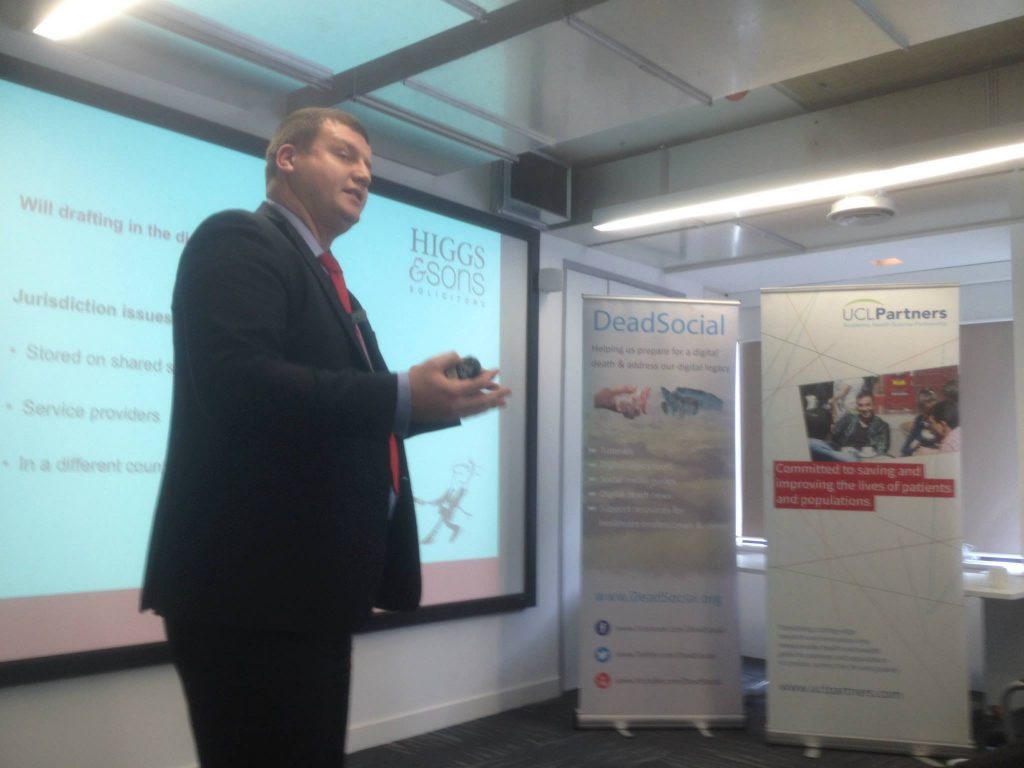 Information about the Digital Legacy Conference 2018 is coming soon.

Thank you for attending… what an incredible day!

Thank you for attending… what an incredible day!

The Digital Legacy Conference addresses, highlights and celebrates work that is being carried out in areas relating to digital legacy and digital assets. Read a review from this year’s conference below: Thank you to our wonderful sponsors and speakers

Digital Legacy Conference 2016 was free to attend took place thanks to the kindness of St Joseph’s Hospice, Seddon Smith Accountants and Leverton & Sons.  We would like to thank the following speakers who contributed their time and expertise:

All of the photos can be viewed here https://www.facebook.com/pg/DigitalLegacyAssociation/photos/?tab=album&album_id=245304605825006

The Digital Legacy Conference 2015 was ran by DeadSocial during Dying Matters Awareness Week 2015. It took place on the…

Millions of people in Britain risk missing out on having their end of life wishes met and leaving their affairs in a mess for their families to sort out because they haven’t planned for their death, according to a new study released by the Dying Matters Coalition.

Today’s ComRes research, released to coincide with Dying Matters Awareness Week (18-24 May) finds that although the majority of us think it is more acceptable to talk about dying now than it was 10 years ago, discussing dying and making end of life plans remains a taboo, as a majority think that people in Britain are uncomfortable discussing dying, death and bereavement.

Despite this failure to talk about dying and plan ahead, 71% of the public agree that if people in Britain felt more comfortable discussing dying, death and bereavement it would be easier to have our end of life wishes met.

When asked about factors to ensure a good death, being pain free was the most important option, chosen by a third of people (33%), followed by being with family and friends (17%), retaining your dignity (13%), being cared for and able to die in the place of your choice (6%), being involved in decisions about your care, or if you are not able to for family and friends to be involved (6%) and having your religious/spiritual needs met (5%).

“We need to change the nation’s approach to dying, so that all of us become better at making our end of life wishes known and asking our loved ones about theirs. Talking about dying and planning ahead may not be easy, but it can help us to make the most of life and spare our loved ones from making difficult decisions on our behalf or dealing with the fallout if we haven’t got our affairs in order.”

“There are encouraging signs that talking about dying is becoming less of a taboo than previously, but too many people are continuing to avoid facing up to their own mortality and are not putting plans in place. The public and health professionals alike need to become more comfortable talking about dying and discussion options for end of life care. We know that many people have strong views about their end of life wishes, but unless they talk about them and plan ahead they are unlikely to be met.”